The bell pepper, while usually used in cooking like a vegetable, is actually considered a berry, with the most common colors being green, yellow, red, and orange. In season July through September, bell peppers make a delicious addition to summer salads, pizza, and pasta dishes. Add peppers to your weekly grocery list and incorporate them into many different meals! They also pack a big nutrition punch and are a good source of vitamins and fiber. 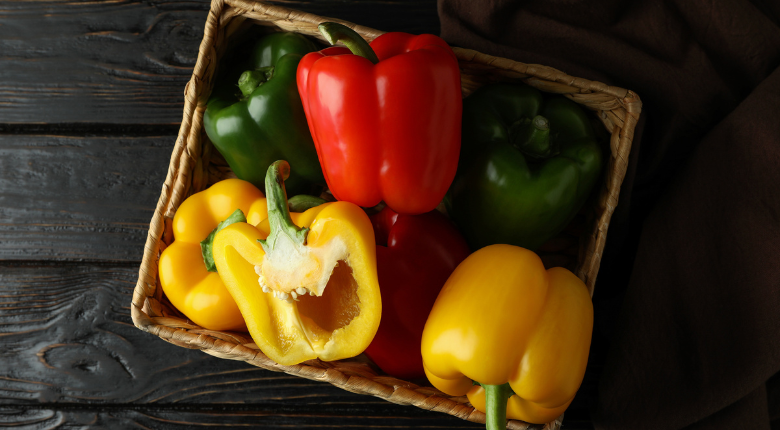 Vitamin B6, pyridoxine, is essential for the production of red blood cells and the proper functioning of nerves. Green peppers are also a good source of provitamin A, which our bodies turn into vitamin A and uses for eye and skin health, and boosts immunity. The fiber in green bell peppers can help you meet your daily fiber goal, preventing constipation and maintaining a healthy gut bacteria balance. Green bell peppers are also high in antioxidant plant compounds, such as carotenoids and phenolic acids, which help to prevent chronic diseases and cancer.


How to Choose and Store Bell Peppers


When choosing green bell peppers, look for peppers with firm, tight skin that doesn’t look bruised or blemished. When ripe, bell peppers will be shiny. Store bell peppers in a plastic bag in the refrigerator, and either poke holes in the bag or store in reusable mesh bags. They’ll last in the fridge for about a week. Once washed and sliced, store in an airtight container for three to four days.


There are many ways to incorporate bell peppers into everyday meals:
Green peppers are generally available year-round at most grocery stores, so enjoy any time you can!